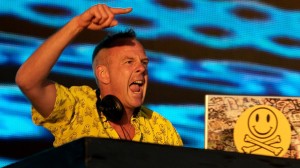 That Present-Tense can sure create a giggle or two. If you enjoy his posts, fear not, he will return later in the countdown.

Norman Cook is a British DJ, musician, and record producers that’s better known as Fatboy Slim. Cook adopted the Fatboy Slim moniker back in 1996, and is instrumental in making the “big beat” popular in the 90′s.

FBS has released a total of five LP’s in his praised career. Mr. Cook is best known for the 1998 single “Rockafeller Skank” off his sophomore album You’ve Come A Long Way, Baby. The tune, as catchy as it is, became a tired act after a while. I will admit, I had the thing on repeat back in 98. Another fine tune from that album was “Praise You,” which actually cracked the Top 40 here in the states. Mr. Cook has released a few more catchy singles including “Weapon Of Choice” in 2001, and “Wonderful Night” in 2004. The video for “Weapon Of Choice” (watch below), features actor Christopher Walken cutting a rug.

The artist formally known as Norman Cook got his start as the bass player and vocalist for the fun 80′s indie band The Housemartins, remember them? The band released two studio albums in their brief career, and their music was just as catchy as some of Mr. Slim’s stuff.

Let’s reacquaint ourselves with The Housemartins here:
“Me and The Farmer”

After The Housemartins called it quits in 1988, Cook formed Beats International, and as recently as 2008. started another project named The Brighton Port Authority.

Fatboy Slim has never come close to the commercial success he enjoyed back in the late 90′s, but he still remains a relevant DJ worldwide. Last year the 50 year old Fatboy released the single “Eat Sleep Rave Repeat,” a collaboration with Riva Starr and Beardyman.

See you in the Sahara…or not.